Some time ago, a group of hams (including me) celebrated an anniversary of Sputnik I by building transmitters of a similar design and power level.  Now it's time to try the first satellite borne transmitter of the USA carried within its Vanguard I spacecraft.  This time we use a single transistor instead of a single tube.  Specifically, a germanium transistor instead of silicon.  The original was on 108 MHz, I think, but that's a bit challenging and that band isn't available to hams. We're using the 20 meter (14 MHz) band.  For authenticity, we try to hold to a single transistor, germanium, with output as a result being in the low milliwatt range.

I came a little late to the party this time because I couldn't find a suitable transistor, but eventually was pointed to some on eBay that were from the old Soviet Union.  Some kind of irony going on here, I guess.  Peaceful co-existence, anyone?

Again, I'm following the trail blazed by Mike, AA1TJ who had the original schematic and made his circuit close to it.  I was able to duplicate it pretty well, but my oscillation was slow to start, so keying would be impossible.  Impatient, I switch to a circuit from Experimental Methods in RF Design.  Here's my circuit: 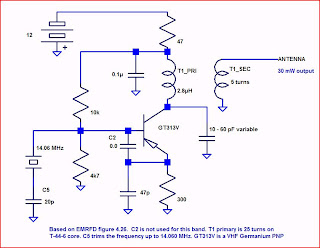 I measured about 30 mW out from the transmitter, which was pretty much my goal.  I haven't yet made my first QSO, but was pleased and a bit amazed to hear my signal (from Arkansas) reported on the Reverse Beacon Network in WVA, VA, NC, OH, and PA after just a few CQs, typically 8 to 10 dB above the noise.  Update:  Just had a partial QSO with WD4HHN in Florida, so things are moving.  I'm not one of those QRP operators of great faith, so I have to admit I'm amazed.  It's fun writing in the log, Power: 0.03 W.

Not wanting to have to pound on a hand key, I also made an interface circuit to my electronic keyer using a 2N4403 PNP transistor switching the positive lead from the battery.

The transmitter went together in an hour or so on a solderless prototype board, photo below: 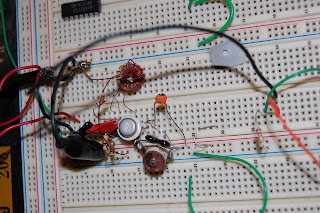 The silver cap thing is the transistor.  The crystal is wrapped in red tape to keep its case from shorting out any adjacent wires.

And here's Michael Rainey's blog entry on his Vanguard project from June, 2012: