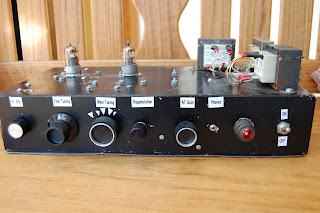 I built this regenerative receiver in the summer of 2010 after Dayton.  I'd built a simple transistor regen previously, but wanted to try a more serious version using tubes.  Calling it a 2-tube receiver is a little misleading since the two tubes are dual section types (tetrode and triode).  So it's more like a 4-tube radio.  This allows some isolation between the antenna and the regen stage and from detector to audio stages.
The design is by David Newkirk WJ1Z and appears in the September 1992 QST and in the ARRL book "QRP Power". I used the suggested method of obtaining B+ by connecting a couple of 240 to 24 VAC transformers back to back. This gave me 120 volts to 12 volts and back to 120 volts, but now isolated from ground (house system neutral), which is why you do this. I wound up with 110 VDC B+, a little low because my transfomers designed for 240 VAC but used at 120 VAC have more impedance than a 120 VAC transformer would.  No big deal.  Also the clever regulator using a neon bulb wouldn't work because it doesn't fire that low.  But I found that it wasn't needed as my voltage was steady.  I used a separate 120 to 12 volt transformer for the filaments.
I didn't make many changes from the design of the article, the main one change being the tuning range.  The design is for about a 2 MHz range to include some SW BC plus 40 meters.  I wasn't interested in SW BC and wanted the better tuning rate and better stability I'd get by restricting the range.  I changed the frequency determining capacitors to give me a range of 6900 kHz to 7350 kHz. The main tuning is reasonably smooth and the fine / bandspread tuning allows getting the desired note on CW and tuning in understandable SSB.
The claims made in the article proved to be accurate.  I don't see any hand capacity effects and the regeneration control is smooth.  There's a little more stuff to fiddle with, but really the use of this receiver is not much more fussy than that of the S-40A sitting behind it as I write this.  The RF attenuator at the input is quite useful when overly strong signals tend to make the signal "tear" or "block", if you know what I mean.  Just back off on the RF control and everything is fine again.  I find that I can pretty much "set and forget" the regen control, although optimizing for selectivity and sensitivity might be useful for weak signal work.
I built the receiver on a big chassis to give me plenty of room and I'm glad I did that.  I did have some issues with stability and microphonics initially, before I narrowed the tuning range.  I also put the tank toroid and several associated capacitors on a perf board and rigidly mounted it, plus made some connecting wiring in the frequency determining areas more heavy and provided more sturdy mounting points. Also "potted" the toroid with hot glue. All that helped a great deal.
I considered adding another tube so I'd have enough audio to drive a speaker.  But it drives my modern low-Z phones really well and if I want a speaker, I plug in some totally incongruous little powered MP3 / cell phone speakers by LG which do a great job.
The white triangles around the main tuning knob indicate 50 kHz steps from 7000 up.  I've replaced them with slightly less ugly but definitely less ambiguous labels showing 50 kHz points from 7000 through 7250 kHz.
There you have it - another project to check off my list: a tube type, good performing regenerative receiver.

I got an actual comment (!) suggesting a photo of the wiring under the chassis would be useful.  I'd considered that initially and now I'm going to add one- 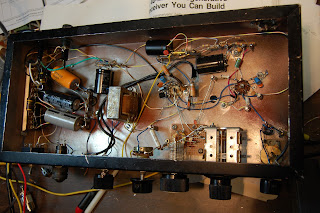 There you have it.  Of interest, I think is the little perf board left of the fine tuning capacitor.  I added this to stabilize things.  It's mounted solidly with four standoffs, not something I'd normally do.  It contains the toroid and several frequency range setting caps including one trimmer.  Note heavy wire leaving this board to solid tie points also added in the interest of stability. The main tuning capacitor is smaller than the one for fine tuning and is visible above the perf board.
Otherwise, the schematic was interesting with it's use of multiple stages of R-C filtering in the B+ and screen voltage sections.  So you see lots of electrolytics.  Center left is the "70 volt" audio transformer used to match audio amplifier section down to modern, relatively low impedance phones or earbuds. In the lower right corner is the input or antenna trimmer capacitor and its associated ferrite toroid inductor just inward from it. The capacitor is screw adjusted from the top side through a hole.  It's pretty much set and forget though, so didn't need to be accessible.
Posted by Nick Kennedy at 6:44 PM 2 comments: