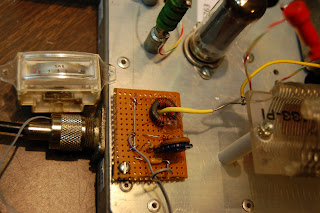 My latest project has been a two-tube crystal controlled 5 watt transmitter. (I wound up with 4 watts.)  But I'm not ready to describe it yet so I'll just talk about the metering.  Initially I was going to use the technique of putting an incandescent lamp in series with the final amplifier plate supply and tune for minimum to indicate resonance.
I noticed that using the plate current indication lamp on the tube TX wasn’t effective at all in tuning for maximum output power.  There was not a good sharp dip.  So I decided to try measuring the output current at the antenna jack and tuning for maximum.
Four watts is about 285 mA rms or 20 volts peak into 50 ohms.  I used an FT50-43 core with 23 turns on it for a 23:1 current reduction.  First I wanted to use an LED indicator.  A problem is that after a couple mA of current, it’s hard to detect any further increase in brightness.  So I needed to scale my current.  I put a 100 ohm pot in series with 200 ohms fixed as a shunt.  The 200 ohms is for a “zero” threshold to get the LED to turn on and the pot is a sensitivity control.  I also had a 0.22 uF capacitor across the output.  The transformer secondary goes through a 1N914 to the positive “bus” output which goes to the LED, capacitor, and sensitivity control / shunt.  I tried it on the rig but didn’t like it.  Too hard to see the peak output.  I might get 3 to 3.5 watts out using the LED but by using the watt meter I could fine tune to 4 watts.
I’d been modeling all this on LTSpice.  I decided to use a junkbox 300 uA horizontal meter with 845 ohms of resistance.  I found that about a 25 ohm shunt would do the job so I bypassed the 200 ohm resistor.  I’d hoped not to use a meter since mounting them is a pain.  I’m not about to cut a hole to fit the meter so I’ll use some ugly method.
Another thing I considered was to have the DC voltage from my detector drive an incandescent bulb using an amplifier, probably a transistor, as some sort of DC current amp. I’d tune for maximum brightness.  I think an incandescent would work better than an LED for this purpose. But then I’d need a DC supply, etc.  So meter it is.  The circuit is trivial, but here it is - 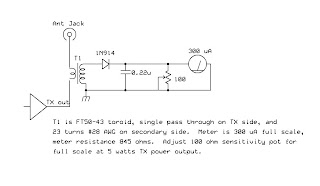 Posted by Nick Kennedy at 6:05 PM No comments: