For my latest, I've put aside my AVR programming and a few other projects to participate in an activity commemorating the October 4, 1957 launch of Sputnik 1, and with it, the space age. It's the brainchild of the master of archaic radio technology Mike Rainey AA1TJ, whose original post is here:

Mike supplied me with the the two Russian "pencil tubes", a 21.060MHz crystal and a vague instruction to do something with them. I reproduced the transmitter shown in the schematic of the above link to the best of my ability.  Initially, I had trouble getting oscillation, so I reduced the size of the "lower" feedback capacitor to get it to go.  Eventually I got all the way down to 10pF, tormenting the crystal all the way up to 21.065MHz.  I had problems with low output, sometimes less than 100mW and was suspicious of my plate RF chokes so eventually went to a 1k resistor on the oscillator plate and a resonant tank on the amplifier.  That put me up to 200mW. 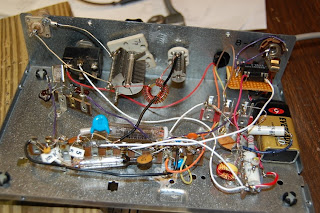 Here's a picture of it.  The tubes have wire leads which I soldered to a terminal strip. For keying, I did what Michael suggested and keyed the PA plate while leaving the oscillator running.  The little perf board has a TTL reed relay for keying.  By this time I'd already made my power cable for B+ and filament and realized I needed 5V for the relay.  Rather than rebuild that cable, I added the 9V battery and a 78L05.  A little foresight could have been helpful.


I got it ready just in time for the October 4th start date.  I was fairly amazed to make four QSOs on a Tuesday afternoon with just 200mW out. They were:

N2JJ recorded my simulated 54 year old transmitter on his Droid phone and sent me the audio file!
W5RZ wished me "DSW".
WB8YYY gave me a 238 RST, one of the strangest I've had.

Inspired by this project, I've done a lot of reading on Sputnik.  I remember very well when it was announced on the news in 1957.  We ran out and looked at the sky.

Some of the ideas I and maybe others had weren't really correct.  First, while the exact time of the launch wasn't known (the Soviets were pretty secretive), it was generally known in the US that the Soviets were very close to making their attempt. The US was also pretty close to launching, with an intended satellite launch planned during the IGY (International Geophysical Year) of 1957. It actually succeeded in January 1958.  But the possibly underestimated reaction of the public and media to Sputnik expedited the program a great deal.

Sputnik transmitted on 20 MHz, allowing ham operators and shortwave listeners worldwide to hear its beeps. Michael chose the 21 MHz ham band for our project to get reasonably close. The American satellites transmitted above 100MHz, which required somewhat more exotic receiving equipment to hear.
Posted by Nick Kennedy at 7:15 PM 2 comments: